Chinese troops put up another tent in Ladakh

Showing no signs of withdrawing from the Indian territory after their incursion in Ladakh two weeks ago, Chinese troops have erected an additional tent in the Daulat Beg Oldi(DBO) sector raising to five the number of such structures in the area. The Chinese troops have also deployed Molosser dogs to keep a vigil, according to […]

WE HAD REPORTED THIS LONG BACK
https://combatgears.wordpress.com/2013/01/21/16000-km-range-missile-dream-project-of-indian-drdo-defense-research-and-development-organisation/

India will retaliate massively even if Pakistan uses tactical nuclear weapons against it. With Pakistan developing “tactical” nuclear warheads, that is, miniaturizing its weapons to be carried on short-range missiles, India will protect its security interests by retaliating to a “smaller” tactical attack in exactly the same manner as it would respond to a “big” strategic attack.

Articulating Indian nuclear policy in this regard for the first time, Shyam Saran, convener of the National Security Advisory Board, said, “India will not be the first to use nuclear weapons, but if it is attacked with such weapons, it would engage in nuclear retaliation which will be massive and designed to inflict unacceptable damage on its adversary. The label on a nuclear weapon used for attacking India, strategic or tactical, is irrelevant from the Indian perspective.” This is significant, because Saran was placing on record India’s official nuclear posture with the full concurrence of the highest levels of nuclear policymakers in New Delhi.

One of the main reasons for Pakistan miniaturizing its nukes is actually to keep its weapons from being confiscated or neutralized by the US, a fear that has grown in the Pakistani establishment in the wake of the operation against Osama bin Laden. “Pakistan has, nevertheless, projected its nuclear deterrent as solely targeted at India and its strategic doctrine mimics the binary nuclear equation between the US and the Soviet Union which prevailed during the Cold War,” Saran said.

Whereas conventional jet
fighters need up to 3000 feet of runway to take off, the F-35B pilot simply pushes the throttle forward and is airborne in less than 500 feet. A computer controls the lift fan, which pushes cold air down, causing the jet to float up. The air also prevents hot exhaust from entering the lift fan and stalling the engine. As the F-35B approaches 288mph, the wings produce enough lift to let the fan disengage.Engine Behind the jet’s supersonic speed is the Pratt & Whitney F135 turbofan. During liftoff, the rear exhaust nozzle rotates to direct the engine’s thrust downward, while a drive shaft in front of the engine turns the lift fan. Roll Nozzles On the underside of each wing, two computer-controlled roll nozzles channel a small amount of thrust from the engine to stabilize the airplane and keep it from rolling out of control. 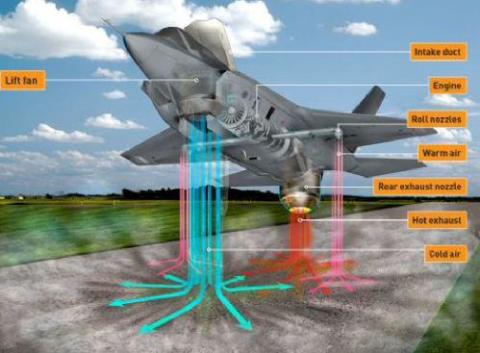 Su-T50 PAKFA aerodynamics analysis: 1- FUSELAGE: T-50’s airframe fuselage has nothing to do with Su-27’s design. Although people tend to confuse that it’s derived from T-10M’s airframe, but It’s completely a new design with smoother edge and parallel edge surface leadins to very low observable design and reduced radar cross-section. Although the ”official” RCS of […]

The Automatic Small Calibre Gun (ASCG) comprises of port and starboard 30mm cannons controlled by an electro-optical fire control system. Providing the operator with day and night picture, the electro optical device tracks targets and provides positional information to the cannon which adjusts its aim so the rounds fired intercept the target. The operator remains safe at all times remotely connected to the system from within the ship. Firing 200 rounds of 30mm ammunition every minute, at a velocity of over 1000m per second out to ranges of 5km it is used to protect the ship against aircraft and fast attack boat

Clam before a Storm: The Dragon Claw Poking the Indian Tiger

China’s likely escalation option against India: Rapid Reaction Forces Given that China has once again decided to ‘sweeten’ it’s recent offer of a Panchsheel redux with a nice juicy intrusion into Indian Territory in the Daulat beg Oldie sector, I think it is time to see some of the options the Chinese military may pursue […]