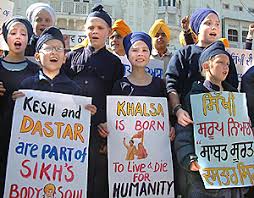 India is reconciled to France’s stand of not revisiting the ban on government-funded school students from wearing conspicuous religious symbols, which include the turban. However, some civil society organisations have threatened to demonstrate during French President Francoise Hollande’s two-day state visit beginning this Thursday over the ban on turbans in public schools. The next day in Mumbai, another set of agitators has planned to protest against the multi-billion dollar Jaitapur civil nuclear project based on French technology.

French diplomatic sources had pointed to “overwhelming support” in their country for the ban on religious symbols in government-funded schools, in an indication of Paris’ reluctance to make an allowance for turbans.

A multi-Ministry delegation from France had visited India to explain the position to their Indian interlocutors on an issue that some Sikh organisations claim impinged on their freedom to practise religion.

New Delhi has now reconciled to the French sticking to their position despite strident calls by Sikh organisations for India to take up the issue just before every major India-France engagement.

Senior diplomat Ruchi Ghanshyam also reiterated the French argument when asked about the ban. “This is an issue which is applied without discrimination in France. No matter which religion a person is from, they cannot display conspicuous religious symbols in public schools. But that does not apply to private schools or to universities,” she told correspondents.