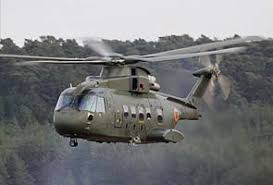 India on Thursday warned Italian firm Finmeccanica of legal action, including blacklisting, over corruption allegations in the VVIP chopper deal and asked them whether any slush money had been paid to fix the deal that has led to a political uproar.

The Ministry of Defence issued a detailed statement on the sequence of the USD 750 million deal for 12 VVIP AgustaWestland helicopters by the Italian firm’s subsidiary, two days after a Central Bureau of Investigation (CBI) probe was ordered into the bribery charges.

The statement noted that the mandatory technical requirements of the chopper were changed in the tender during the Vajpayee government in 2003, with the then national security adviser Brajesh Mishra playing a key role.

The Defence Ministry has asked the chief of AgustaWestland to “categorically state the clear position in view of the current developments indicating specifically if any financial transaction has taken place with any Indian individual/entity which would be violative of the integrity pact or any other terms and conditions of the contract”.

It also cited the clauses of the integrity pact that was signed, noting that the contract bars paying of bribes or involvement of middlemen. The clause warned of “strict action including cancellation of contract, recovery of payment, blacklisting and penal action” against the vendors.

The Defence Ministry warned that the government is “determined to take all possible legal and administrative action against the guilty parties and accordingly has ordered a thorough probe by CBI”.

The statement also said that the first request for the proposal was issued in March 2002 mandating 6,000 metres as the flying altitude for selection of the chopper.

Under this, AgustaWestland “was not certified for an altitude of 6,000 metres and it did not participate in the flight evaluation”. This ruled out other competitors, and only Eurocopter of France was found suitable.

In 2003, changes were made to enable other competitors enter the bid, the statement said.

Italian investigators have named three relatives of former Indian Air Force chief SP Tyagi as beneficiaries of the slush money. The revelations have led to an uproar in the country with the Bharatiya Janata Party (BJP) comparing the chopper deal with the Bofors scam.

BJP spokesperson Prakash Javadekar demanded said that CBI probe should be monitored by a competent authority.

“Ordering a mere CBI inquiry is not enough. It must be monitored,” he told reporters.

However, senior BJP leader and former defence minister Jaswant Singh came out in support of the former Air Force chief.

“We should not make wild allegations against a former air chief. It is not in the interest of both the Air Force and the country,” he said.

Tyagi has denied any wrongdoing.

One of his cousins accused in the bribery termed the allegations as “baseless”.

The three Tyagi brothers — Julie, Docsa and Sanjeev — are alleged to have received kickbacks of around Rs 72 lakh from middlemen.

Julie Tyagi claimed he and his two brothers are involved in the power sector as consultants and have never ventured into the defence sector in any way.

The Italian probe report suggests that the former IAF chief had met the middlemen more than six to seven times and allegedly briefed them about the developments in the contract.