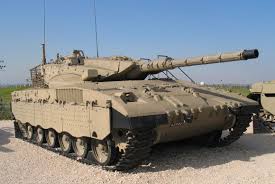 The new MBT is one of the most protected tanks in the world. It has a new armor, comparing with predecessor. Hull of the Merkava Mk.4 was redesigned to install new engine. A front-mounted engine also provided improved frontal protection. The Mk.4 is also fitted with new modular armor, that can be reconfigured to match specific threats. Bottom of the hull has been strengthened for better protection against land mines. This main battle tank can also be fitted with Trophy active protection system.

Also it can fire all standard NATO munitions. Ten rounds are stored in electrically operated revolving magazine and are ready to fire at any time. Every single round is stored in a protective container, to protect the crew in case the ammunition explosion. Loader semi-automatically selects the ammunition type. This main battle tank is equipped with new fire control system, that includes some very advanced features. One of them is a high hit probability firing against helicopters using conventional munitions. Secondary armament consists of 7.62-mm machine guns, and internally-operated 60-mm mortar.

This main battle tank has a battle management system. It enables crew to plan missions, navigate and update their situation awareness. It also reports friendly units of enemy targets. Integrated battle management system combines tanks, anti-tank and artillery units and helicopters in a combined task force. The Merkava Mk.4 has a crew of four, including commander, gunner, loader and driver. Furthermore it can transport eight troops or three stretcher casualties in place of the ammunition load.

Troops enter and leave the vehicle threw the rear hatch. This main battle tank is powered by General Dynamics 883 V-12 diesel engine. It develops 1 500 horsepower and delivers 25% more power comparing with the previous 1 200 hp engine on the Merkava Mk.3. This engine was originally developed by German MTU, but it is license-built by General Dynamics Land Systems in USA. The same engine is used on the French Leclerc main battle tank. Engine pack and transmission are located at the front of the hull.

It is a unique design, which allowed to free space for the troops or cargo at the rear of the hull. It can carry up to 10 troops, when ammunition is unloaded. The Merkava Mk.4 currently is not offered for export, but some it’s systems and components are available for export customers.

Namer heavy armored personnel carrier, based on the Merkava Mk.4 chassis. It has a crew of two and can carry 10 fully equipped troops. Vehicle has protection level similar to the Merkava Mk.4. It entered service with the Israel Defense Forces in 2008.