← Indian Army developing by leaps and bounds, its logistics and transport capablities.
Intelligible life beyond Earth:Nightmarte or a potential ally?? →

22 choppers to chop the enemy!! This is probably the best chopper ever made

New Delhi: The Indian Air Force on Friday said it is procuring 22 Apache attack helicopters from the US, which will give it the capability to strike down enemy choppers and UAVs. “Yes, Apache is final now,” IAF Air Chief Marshal NAK Browne said when asked if the IAF was procuring the American choppers in a 1.4 billion dollar deal.

“We are going to contract for Apache and these will be paid for by the IAF, flown by the IAF and maintained by the IAF,” Browne said. Apache edged out Russian Mi-28 attack helicopter in the race for the IAF contract.

Fitted with air-to-air missiles, an Apache helicopter has the capability to take on enemy choppers and UAV, providing support to ground troops. Capable of detecting 256 moving targets and engaging them, the twin-engine Apache is operated by two pilots. With its array of modern electronics, Apache is considered to be one of the most advanced combat helicopters. It has successfully carried out missions during the 1991 Gulf War between the US and Iraq and then in Afghanistan.

Fitted with air-to-air missiles, an Apache helicopter has the capability to take on enemy choppers and UAV. 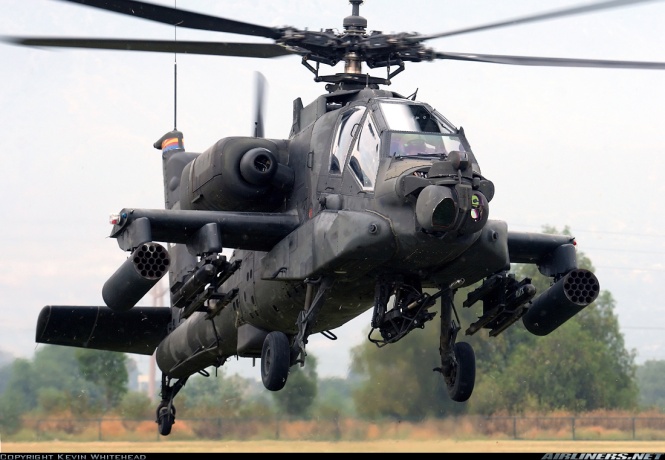 Talking about the future road map for inducting Apache, Browne said “Apache helicopters have full air-to-air capability. That means it can take care of itself, it can shoot down another helicopter or a UAV or a fighter aircraft because they have air-to-air missile as well.” Replying to a query on a tender to procure six mid-air refuelling tanker aircraft, Browne said the bids were opened on Thursday and bids for the heavy lift helicopters will be opened in near future.

In the tanker tender, European Airbus and Russian Ilyushin are in the race, whereas American Chinook and Russian Mi-26 are competing for the heavy lift helicopter tender.

Replying to a question on phasing out of MiG series fighter aircraft, Browne said the MiG-27 will the last in the series of these planes.

“Their phase-out process will start from 2016-17 onwards,” he said, adding the aircraft has two squadrons each at Kalaikunda and Jodhpur. The squadron at Jodhpur flies the upgraded version of the MiG-27 fighter aircraft.

Asked about the re-engineering of 125 Jaguar aircraft, the Air Chief said the tender will be issued this month and Honeywell has been selected in the process for its F-125 engines.

It will be a single vendor tender as no other company, including Original Engine Supplier Rolls Royce, is willing to offer their products for the aircraft modernisation. In reply to a query over war room leaks which is being investigated by CBI, Browne said the IAF was the first to expose the entire case.

“We were the one to expose the entire case and we had sincerely hoped that they (people involved in it) will remain in Tihar (jail) for a long time. But that did not happen and they picked up business all over again,” he said.

Browne had headed the intelligence wing of the IAF when the incident took place. Arms dealer Abhishek Verma was arrested by CBI for his role in it. The Air Force chief supported implementation of Official Secrets Act (OSA) in these cases.

“Let’s not confuse some of the cases where classified information is concerned. As long as it is classified, it remains classified and accordingly OSA needs to be implemented on all these,” he said.

On lessons learnt by the Services after the incident, he said “we are very stringent and strict on anybody involved in these. In fact, the officer who was involved was dismissed. That was the first action we took even before everything came out.”

Posted on January 7, 2013, in Aviation. Bookmark the permalink. 1 Comment.

← Indian Army developing by leaps and bounds, its logistics and transport capablities.
Intelligible life beyond Earth:Nightmarte or a potential ally?? →