The Navy, which had earlier turned its back on the Advanced Light Helicopter (ALH) built by Hindustan Aeronautics Limited (HAL) over issues with the dimension of the helicopter blade that ostensibly made it unsuitable for ship-borne operations, is learnt to have evinced interest, at Aero India, in the weaponised ALH named Rudra, which was inducted into the Army.

The force, which currently operates eight ALHs mainly for search and rescue operations, is keen on inducting at least 20 Rudras, the Mark 4 version of weapon system integrated ALH, for coastal security operations.

The Coast Guard, in the meantime, may opt for a truncated version of Rudra, probably the Mark 3 variant with a customised side-mounted gun, for the same purpose.

During recent flight trials of Rudra over the sea at Kochi, its sensors proved their mettle tracking ships from a range of about 12 km to 14 km. “The quality of the image was so good that we could read names of vessels from that distance,” said Wing Commander (retired) Subash P. John, test pilot (rotary wing) of HAL.

He said the Light Combat Helicopter (LCH), under development at HAL, is also shaping up well, is all set to take part in the forthcoming firepower demonstration of the Air Force, Iron Fist, in Pokhran. “The helicopter will fly in formation with other HAL helicopters Cheetah, Chetak and ALH besides doing some display-flying,” he said.

The LCH programme, funded by the Air Force, is progressing well, and the aim is to hand over the first helicopter at the next edition of Aero India. “The LUH prototype would hopefully be flying then,” he said.

The Air Force has placed orders for 64 LCHs and the Army has expressed its desire to buy 114.

Two LCH helicopters, technology demonstrators 1 and 2 (TD-1 and TD-2), are flying at the moment, while TD-3, which will be the final configuration of the helicopter, will be flying at the beginning of next year, he pointed out.

The LCH, in the 5.8 to 5.10 tonne class of helicopters, will have anti-tank guided missiles (ATGM), which will be either MBDA-made Pars3 or Rafael-built Spike-ER till the time the indigenous Helina gets operational; air-to-air missile Mistral2; 70 mm rockets and 20 mm turret-mounted guns that can be operated using helmet-mounted pointing mechanism.

There exists a capability gap in neutralising unmanned aerial vehicles (UAVs) that violate Indian air space and the LCH is an ideal platform for intercepting these surveillance UAVs, said Mr. Pillai.

The two TDs currently flight-tested are carrying dummy warheads, but weapon integration and testing will be done once TD3 comes out.

The stealth helicopter, with very low radar cross-section, is suited for high-altitude operations as well. “We took the helicopter to 20,000 ft during trials over Bangalore,” said Mr. Pillai. 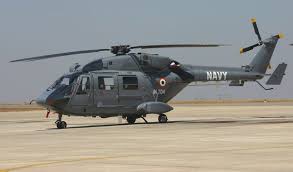 Posted on February 11, 2013, in Uncategorized. Bookmark the permalink. Leave a comment.