Clam before a Storm: The Dragon Claw Poking the Indian Tiger 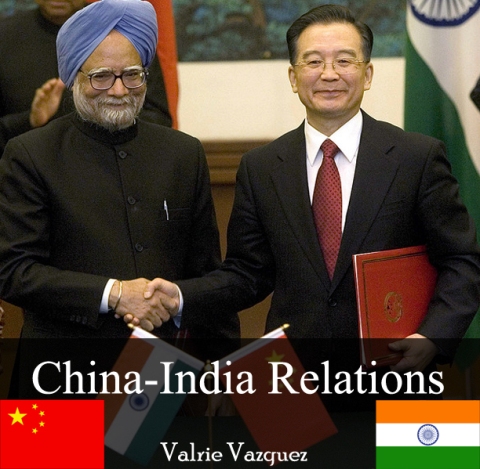 Given that China has once again decided to ‘sweeten’ it’s recent offer of a Panchsheel redux with a nice juicy intrusion into Indian Territory in the Daulat beg Oldie sector, I think it is time to see some of the options the Chinese military may pursue if the matter escalates.

Now there has been much alarmist talk in the Indian media about how the rapid infrastructure build-up in the two Chinese military regions (MRs) – Lanzhou and Chengdu – facing India will allow the Chinese to mass ‘almost half a million troops on the border’ over a 30 day period. However given doctrinal changes in the Chinese Army (CA) pursuant to the reforms in its force structure and pursuit of hi-tech weaponry, it is highly unlikely that the Chinese would be looking to fight an enlarged version of the 1962 war especially in light of India’s counter build-up. On the other hand there is a possibility that the Chinese may choose to initiate a much more localized conflict perhaps somewhat covertly, looking to achieve specific objectives such as a heliborne assault on Tawang for example, by using elements of its rapid reaction forces (RRF) that have been developed in the last two decades. Even in the event of a multi-front all-out war, it is these units that will be used in the opening stages and as such constitute the vanguard of the CA for possible conflict with India.

The stated aim of the Chinese military today is to ‘win local wars under the conditions of informationization’. This approach actually has its roots in Deng Xiaoping’s assessments about the nature of future warfare made in a Central Military Commission (CMC) meeting in 1985 wherein he observed that there had been a fundamental change in the nature of competition itself in the global arena. As per this formulation rather than building preparedness to fight massive conflicts, nation states in the contemporary world instead look to maintain a techno-economic edge over rivals with the possibility of short yet decisive engagements forming the backdrop.

Although the re-equipment process started in the eighties, it was in 1992, that the largest component of Chinese RRFs called “Resolving Emergency Mobile Combat Forces” (REMCF) was unveiled and the mandate for this force came directly from the CMC. REMCF designated units were assigned the role of border defence, subduing internal armed conflict, maintaining public order, and orchestrating disaster relief missions. The development of the REMCF concept followed a phased approach whereby in the first phase the traditional Group Army corps of every MR selected an infantry division to be designated as a REMCF unit for dealing with situations arising on any of China’s borders. In the second phase of development implemented in 1994, there was greater internalization of the lessons learnt from the first Gulf War and a second batch of divisions trained for “quick fighting, quick resolution” of high intensity and hi-tech regional conflicts was revealed. Subsequent to the accretion of more divisions the consolidated strength of REMCF units is believed to have stabilized at around 300000 since the late nineties.

Now RRF type formations as defined by the Chinese are supposed to be capable of deployment to any part of China within a two week period. More realistically though, REMCF units of immediate relevance to India are those already based in the Lanzhou and Chengdu MRs. Indeed despite the asphalting and development of all key highways headed into Tibet, the fact remains that only the RRF units stationed in these two MRs can be used in operations against India within 3-5 days of having taken a decision to do so by the CMC.

In Chengdu MR, which has under its jurisdiction the Tibet Military District (MD), the highly mechanized 149th Rapid Reaction Motorized Division is the designated REMCF unit. This unit was used to suppress the 2008 riots in Lhasa which showed that although based in Leshan, Sichuan province, it could manoeuvre heavy equipment into Lhasa using the Qinghai-Tibet railway and the upgraded Sichuan-Tibet national highway with relative ease. As such, the 149th can possibly deploy its WZ-501 and WZ-534 armoured/ Infantry fighting vehicles (AFV/IFV) and WZ-551 armoured personnel carriers (APC) along with gun and missile armed derivatives of the WZ-551 for use against India in less than 48 hours.

Similarly the other REMCF unit that can be brought into play rather quickly is the 61st Plateau Rapid Reaction Motorized Division of No. 21 Group Army under Lanzhou MR which too can reach a point in Tibet within a rather compressed time-frame. This wherewithal to bring in two combined armed divisions to a mountainous frontier for a joint operation with the Chinese Air Force (CAF) at a very short notice is the really noteworthy result of the much talked about infrastructure development on the Tibetan plateau and a threat that has made the Indian military sit up and take notice.

As far as the quality of these troops is concerned, it seems that the Chinese brass want every soldier in REMCF units to undergo specialized training which includes activities such as swimming, skiing, and mountain climbing. Also infantry soldiers in these units are required to become proficient with every weapon system assigned to the company units within their REMCF formation consolidate ‘three attacks and five defences’ and conduct the ‘three real trainings’. The ‘three attacks’ refer to assaults on helicopters, tanks, and airborne troops the ‘Five defences’ are indicative of the need to defend against chemical biological radiological and nuclear (CBRN) use, electronic countermeasures, and precision-guided weapon systems. The ‘three real trainings’ is a reference to deploying real troops, conducting real operations, and using live ammunition in exercises conducted in the assigned area of operations and in other theatres. Essentially REMCF units are expected to gain competency in combined arms warfare in a networked environment.

Interestingly there are also special forces components within these two MRs that are designated as RRFs in addition to the REMCF units described above. These Army Special Force (ASF) units are regiment sized and report to the CMC via MR headquarters. The two key missions of these units are direct action and special reconnaissance and they apparently use a variety of infiltration techniques in aid of such missions. Chinese ASF is noted for its use of powered parachutes and paragliders in mountainous areas. It is also worth mentioning that these SFs are specially trained for carrying out decapitating strikes against high value civilian and non-civilian targets in the adversary’s rear. Additionally, they are trained and equipped to carry out long duration raids spanning four hours or more.

The ASF unit of greatest concern to India is the Chengdu MR’s colourfully named ‘Falcons of the Southwest’. Some two decades ago this unit has received numerous citations for its air-assault and forward-reconnaissance skills and is trained to operate armoured vehicles as well as fly helicopters. Given its apparent capability in airborne insertion, surprise attacks and emergency evacuations, this unit would most likely be the weapon of choice in any hypothetical scenario that involves any Chinese attempt to seize strategic locations in Arunachal Pradesh such as Itanagar. The ‘Falcons of the Southwest’ are probably mirrored by the Lanzhou MR’s ‘Tigers of the Night’ which could be used in similar operations against India in the Northern theatre.

Though not based in Chengdu or Lanzhou MR, the 15th Airborne corps of the CAF seems to have also enjoyed very high priority with respect to modernization in recent times. Consisting of three airborne divisions with 15000 troops each this is a RRF formation once again under direct command of the CMC. Based on the Russian VDV, this unit has been increasingly exercising in Tibet and while becoming more and more mechanized in the process. It has air-droppable armour such as ZBD-03 IFV, light trucks and jeep as well as integral artillery, air defence and anti-tank elements. However given strategic airlift constraints (chiefly due to the fact that the CAF has less than two dozen Il-76s and far fewer IL-78 refuellers) at the moment only one division of the 15th Airborne can be moved to Tibet at short notice.

Meanwhile the key air-mobility enabler of CA RRF units – the Army Aviation Unit (AAU) established in 1986 has seen steady accretion since its inception. Tasked with deploying helicopters and light aircraft to support ground forces the AAU has also been deeply involved in combined day and night exercises performing anti-armour, special forces insertion and electronic warfare operations. The AAU now has in its order of battle new attack helicopters such as the heavy WZ-10 and the much lighter WZ-11, over 200 Harbin Z-9s, 40 Changhe Z-8s and most significantly hundreds of Mi-8/17 stable medium lift helicopters. Indeed the Chinese decision to license produce Mi-17s is a very significant development and a key indicator of the priorities of the Chinese military.

The rising profile of RRFs within the Chinese military setup brings forth important issues for Indian defence planners. The Chinese military’s turn towards precision firepower and mobile land forces is accompanied by a concomitant downsizing of the CA which actually makes the ’30 divisions in a month’ scenario look rather implausible and this has been sought of confirmed by the white paper they released recently.. Doctrine, equipment trends, basing and localization and logistical issues despite all the efforts put into cross MR mobility show that the CA is not really interested in another 1962 style engagement.

In fact the very ability to move two REMCF units to the Indian border rapidly is an achievement in itself and should not be underestimated. The CA judging by recent developments might be more inclined towards either vertical envelopment operations and/or infiltration by ASFs into Arunachal Pradesh or Ladakh. It could all begin with the current micro-Kargil like intrusion that the CA has undertaken in Burtse sector.

The Chinese may be conceptualizing a limited strike at a time and place of their choosing using airpower, ASFs and one of the REMCFs with the fact that they also possess a not insignificant nuclear and conventional ballistic missile force deployed in Chengdu MR in the background. In such a construct it is really difficult to see how India can avoid building up mountain strike forces of its own. A defensive posture based on concentrated firepower and active manning along India’s vast mountainous border with China is a strange doctrine given that the Chinese are least likely to attack along a broad front and in any case there could always be gaps that allow ASFs to slip in.

A much better proposition is to give a symmetric response in the form of a mountain strike corps (MSC) or two that can be airlifted into Tibet to seize territory just the way the Chinese possibly intend to in Arunachal Pradesh. On the defensive side of things, the setting up of Integrated Air Command and Control System nodes facing China must be expedited, since the best way to deter Chinese RRFs is to deny them the use of airspace. Ultimately a joint Army-Air force response by India with an active defence strategy is the best way forward to ensure that China desists from ‘resolving emergency mobile combat’ situations.

Posted on April 24, 2013, in Geo-Politics. Bookmark the permalink. Leave a comment.