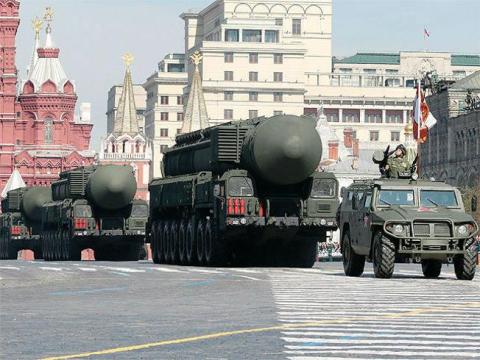 In photo: Russian intercontinental strategic missiles Topol-M move along Red Square during a Victory Day parade on Thursday, May 9, 2013.

Russia celebrated it’s Victory Day with a fine display of heavy intercontinental missiles, Tu-95 bombers that can easily reach the shores of the United States.

Topol intercontinental ballistic missiles (ICBM) have been part of Russia’s military arsenal for many years now. We take a look at some deadly facts about the ICBM:

*Topol-M is a three-stage ballistic missile which can be deployed on both stationary and mobile launch platforms.

*The Topol missiles are a key part of Russia’s nuclear deterrent strategy.

*The new age Topol-M was a replacement of Russia’s aging Soviet-era missiles.

*Another variant of the Topol missiles, RS-12M Topol, called the SS-25 Sickle by NATO, has a maximum range of 10,000 km and can carry one 550-kiloton warhead.