n this day, in the records of military warfare, a tale of bravery was written – when an army of 21 Sikh soldiers, in an isolated communications post, made a gallant stand against an enemy 10,000 strong. Fighting to the last man, they would create a lasting legacy of human bravery and valour on the battlefield. 12th September 1897 was the day when the Battle of Saragarhi was fought.

During the Raj, the British colonial rulers had constructed a series of forts to control the NWFP (North West Frontier Province – today a state in Pakistan) in order to provide security to troops against marauding tribesmen and their lashkars (large body of troops). Most of these forts had initially been built by Maharaja Ranjit Singh as part of the consolidation of the Sikh empire in Punjab, and the British added some more.

Two such forts on the Samana ridge of the Hindukush and Sulaiman ranges were Fort Lockhart and Fort Gulistan – both situated only a few miles apart. Since these forts were not inter-visible, a signaling relay post called Saragarhi was located mid-way on a cliff to provide visual Morse code signals using a heliograph between them. In 1897 there was a general uprising in the NWFP engineered by the Afghans. The 36th Sikh regimentunder the British army was deployed to protect the Gulistan and Lockhart forts. On the 3rd and 9th September 1897, Orakazai and Afridi lashkars attacked Fort Gulistan but were defeated.

Following their victory, the 36th Sikh troops, while returning from Fort Lockhart stationed 21 of their soldiers at Saragarhi under Havildar Ishar Singh. The Afghan tribes saw this as a golden opportunity, and on 12th September 1897, large hordes of tribesmen attacked Saragarhi. Their strategy was to ensure that no help from Lockhart reached Saragarhi and, after destroying Saragarhi, attack fort Lockhart and Gulistan.

The Commanding Officer of 36th Sikh, Lt. Col. Haughton, was at Fort Lockhart and in communication with the Saragarhi post. He could see from his position that the tribes were numbered around ten to twelve thousand and requested for reinforcements from Headquarters. Havildar Singh and his men knew well that Saragarhi would fall, because a handful of men in that make-shift post of stones and mud walls with a wooden door could not withstand the onslaught of thousands of tribesmen. The soldiers’ duty was to defend Saragarhi while waiting for reinforcements to arrive.

It must be noted here that the 21 soldiers were not there out of choice, but duty. Now that they were, it was their job to live – and if necessary die – fighting to protect it in the best tradition of their race and regiment.

At Saragarhi, the Afghans made numerous unsuccessful attempts to break open the gate of the post. While they suffered heavy casualties, the defenders too kept dwindling with their depleting ammunition. Without consideration to his safety, Sepoy Gurmukh Singh kept signaling a minute-to-minute account of the Battle from Saragarhi to the Battalion Headquarters. When repeated attacks failed, the Afghans set fire to the surrounding bushes and two of the tribesmen under cover of smoke, managed to make a breach in the wall.

A few soldiers were ordered to deal with this breach. This resulted in weakening of the resistance covering the gate. The Afghans now rushed the gate as well as the breach. Thereafter, one of the finest hand-to-hand fights followed. The handful of trapped men at Fort Lockhart also witnessed this unique saga of heroism and valour unfold at Saragarhi.

After conquering Saragarhi, the tribals set it on fire, while the soldiers lay dead or dying with their ammunition exhausted. Having destroyed Saragarhi, the Afghans turned to Fort Gulistan, but they had been successfully delayed in their progress, and reinforcements arrived in the night of 13th September, before the fort could be conquered.

After the Afghan uprising was suppressed, the Army recaptured Saragarhi. They found 600 bodies – 21 of them were Sikh men in uniforms. It is believed that 4,800 Afghans were wounded in the battle.

When the gallantry of Saragarhi was recounted to the British Parliament, the members gave a standing ovation in tribute to the 21 Indian soldiers. The story was received around the world with awe and admiration. Each of the 21 valiant men of this epic battle were posthumously awarded the Indian Order of Merit Class III by the Queen of England. This award is equivalent to today’s Param Vir Chakra. Never before or since has a body of troops – that is, all of them – won gallantry awards in a single action.

Among the very few people researching the battle of Saragarhi is Jay Singh-Sohal, who is currently working on a documentary film titled 21 Sikhs. In a recent discussion, Singh-Sohal explains:-

“Saragarhi was forgotten because it was just yet another example of valour and bravery shown by Sikhs during the Raj. The importance of Saragarhi is that as an event it marks a highpoint in what I call ‘the special respect’ the British had for Sikhs during the times of colonial rule. The Sikhs were brave, the Sikhs were loyal – and they would rather die than surrender.

The British recognized this and recruited them in the thousands – sending them all over the world to serve the interests of the crown. Without the Sikhs fighting for the British – it would have been difficult for the British to protect and secure the North West Frontier Province, Hong Kong, Burma. Without Sikhs in East-Africa, Mesopotamia and Gallipoli – the great-war could have been protracted. Without Sikhs in Flanders, the Germans might have reached the ports and the course of history might have been different. I find this history all very inspiring not only because it shines a light into a bygone age but because this respect and high esteem the Sikhs were held in, has been forgotten – my work as a filmmaker is to tell this story. After all, if we don’t who will?”

The Battle of Saragarhi is a tale of the incredible valour of a handful of soldiers who believed in their duty and remained unconquered even in death, with the Sikh war cry ringing from their dying lips in defiance of the foe. You must not and will not be forgotten. 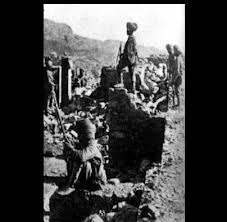 Posted on February 2, 2013, in Uncategorized and tagged politics. Bookmark the permalink. 1 Comment.